In this post, you will learn about the most common Power Apps Power Automate Interview Questions that the clients are asking while shortlisting a candidate.

What is the difference between Canvas App & Model-driven App

PowerApps allows you to create canvas apps and model-driven apps. Canvas apps start with your user experience, allowing you to create a highly customizable interface by using various UI controls such as labels, text-input boxes, drop-down lists, media, charts, and so on.

Model-driven app development starts with your data model and uses a component-based approach to developing a robust app. Model-driven apps are comprised of components such as entities, views, charts, forms, business processes, and dashboards which together form a great UI.

What is Common Data Service and why we should use it?

Common Data Service is an abstraction on top of underlying Azure cloud data management services to make it easier to build business applications.

Can we use multiple Data Sources in a single canvas app?

What are the different ways in which we can submit data from PowerApps?

What is a Collection? How can you create a collection?

This is a special kind of data source, which is local to the app and is not connected to the cloud service. A collection data is local to the device and cannot be shared across devices for the same user or different users. Collections can be saved and retrieved locally from the device. Collect, ClearCollect, and Clear function can be used to manipulate collections.

What is Delegation? What are the challenges you have faced while working with a large data source in a Power App?

To maintain the performance of an app it is important that when working with a large data source we should minimize the amount of data that is brought to the user device for data operation. If we have a SQL database table having millions of records and we want to search for a specific record based on a parameter, we cannot bring the entire records to the app locally and then do the data operation. Bringing such a huge amount of data locally will drastically impact the performance of your app. To overcome this issue PowerApps supports Delegation

Delegation is a mechanism to minimize the amount of data being transferred locally to the device by delegating processing of data to the data source, instead of moving the data to the app for processing locally.

These are the most popular data sources which support delegation:

Here is a list of few delegable and non-delegable functions that can be used with a delegable data source:

How you can implement Error Handling in Power Apps?

You can use the Errors function to get the details of any errors. You can avoid a few of the errors before they occur using the DataSourceInfo and Validation function.

How to use Components in Canvas Apps - Input/Output Parameters

Components are reusable building blocks for canvas apps so that app makers can create custom controls and use them across apps. Components can be exported and imported in different apps across organizations.

Components are useful in building larger apps that have similar control patterns. For example, we can build a navigation control and use it across our app on different screens. Once we update a component, all instances in the app reflect your changes. Components improve performance and help in standardizing the look-and-feel of PowerApps apps in an organization.

How to use media files in Canvas App?

You can upload up to 200 MB of media per app in Power Apps. However, the recommended approach is to use blob/media storage services like Azure Storage or Azure Media Service and embed your media URL to the app.

Use the Set function to set the value of a global variable, which temporarily holds a piece of information, such as the number of times the user has selected a button or the result of data operation.

Use the UpdateContext function to create a context variable, which temporarily holds a piece of information, such as the number of times the user has selected a button or the result of data operation.

How do you create different user environment in Power Apps?

An environment is a space to store, manage, and share your organization's business data, apps, and flows. It also serves as a container to separate apps that might have different roles, security requirements, or target audiences. How you choose to use environments depends on your organization and the apps you're trying to build.

How to customize SharePoint list form using Power Apps?
How to use these Connectors – SharePoint, SQL Server, Office365Users
Is it possible to access local network data sources in Power Apps? How can you connect to SQL Server database or SharePoint Server running locally?

Yes, we can connect to the local network data source in the Power Apps.

How does the licensing works for Power Apps?

Enables users to run unlimited applications based on the full capabilities of PowerApps.

Power Automate (previously known as Microsoft Flow) is one of the easiest and one of the most powerful tools. It can be used to do automation and integration with 275+ data sources including Excel, SharePoint, SQL Server, Oracle, etc. With the help of the Power Automate, you can develop, integrate, and automate your business processes very quickly.

Microsoft has added Robotic process automation (RPA) capabilities to the Power Automate known as UI Flow. you can also use AI Builder to create and train your own models and use them in the Flow. In this section, you will learn about some of the most common interview questions that the interviewer asks during the Power Automate interview.

What is expressions and how can we use it in a Flow?

How can we implement error handling in Power Automate?

How to use AI Builder models in Power Automate?
How do you integrate Power Automate with Power Apps?
How you can move your list of flows from one user environment to another?

If you have been asked a new question that is not covered here in this blog Power Apps Power Automate Interview Questions, please feel free to comment below and I will be happy to provide solutions. 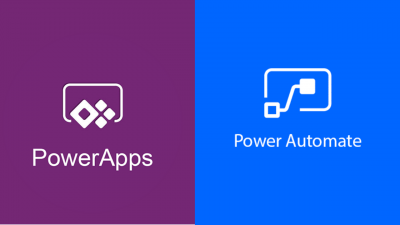